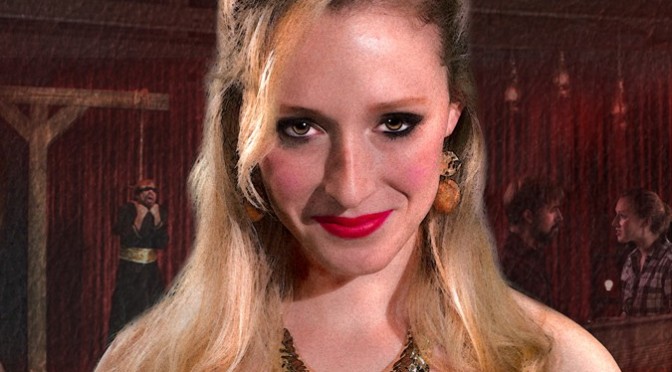 Guinevere was my pre-thesis project at The University of New Orleans. The film was a 13-minute short about a magician’s assistant (Claire Frederiksen) who discovers that her employer Nikolay’s (Samuel Cobean) death-defying tricks are actually not tricks at all. The film also stars James Yeargain as a mysterious stranger who seems, for some reason, to be on Nikolay’s trail.

The film was ambitious. Basically a thriller with magical elements, there were both complicated stunts and a fairly robust world we had to create visually. Nikolay is a man who has traveled all over the world and his backstage home had to be filled with all sorts of oddities. We also had to “hang” Sam, our Nikolay, as part of Nikolay’s death-defying performance. He hangs himself from a gallows and then is cut down by his assistant, only to stand up unharmed.

Alexander Lanaux oversaw the construction of the gallows, which had to not only look right but also function. It needed to be able to support Sam’s weight and more. When it was finally completed and tested, Alex was confident it could bear over to two times Sam’s weight and it functioned flawlessly during production.

To achieve this effect we had Sam rigged in a hanging harness, the same as used for similar stunts in Hollywood, which was worn under Sam’s robe. A strong cable was placed inside the rope noose and then hooked to a loop in the harness behind Sam’s head. In this way, the noose around Sam’s neck was never actually attached to anything (it was held in place by a piece of tape) so if the cable were to break it would be impossible for the noose to hold and Sam could not be in any danger.

Margaret Broach was the Production Designer on the film and did a great job assembling an army of strange props to adorn Nikolay’s prop table backstage.

Marcus Pontello sewed Nikolay’s robe. The initial pattern for the robe was for a Matrix-type coat, the sort of cassock-type piece that Keanu Reeves wears at some point in that series. Marcus took that pattern and altered it into the item that we used for Nikolay, adding the gold touches himself.

I had always wanted a color scheme of black and gold to represent the presence of both magic and death in this world. Obviously, Nikolay’s act revolves around death but there are other mortal threats in the story beyond Nikolay’s faked demise.

Here is an early design sketch I created of the Nikolay character, and you can see how Marcus’s final costume reflects it:

Ultimately, Guinevere is a fun story that I think has a unique premise and explores adventurous territory not often explored in short films.